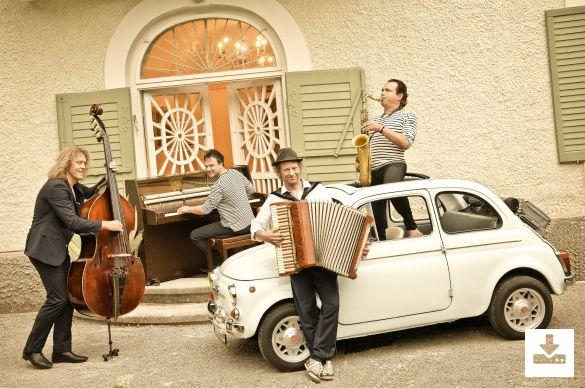 In its programme Canzone della Strada, Quadro Nuevo explores old Italian tango and lyrical canciones.
Music of an Italy almost lost in time, once so enchantingly presented by long forgotten singers of the likes of Carlo Buti, Nilla Pizzi, and Claudio Villa. Visions of the South, firing the melancholic fantasy yearning in North and Central Europeans since time immemorial, are awoken by their songs.
These take their place next to temperamental Neapolitan street hits and daring improvisations.
Quadro Nuevo drew its ideas and inspiration from long trips through Italy.
Musical jewels pickup up from the streets and squares of Mediterranean towns.

The album Quadro Nuevo: Canzone della Strada records this musical dream. It was distinguished with the German Jazz Award and the Impala European Phono Award and climbed into the Top Ten of the Jazz and World Music Charts.

The four musicians have been on tour since 1996 through the countries of this world and have given around 3500 concerts so far. Their venues are as diverse as the roots of their music: The nostalgic-acoustic ensemble not only appears in concert halls and at festivals. The fervent virtuosi also travel around the southern Mediterranean as street musicians inviting their audience to dance as a nightly tango band.
Quadro Nuevo have played at numerous renowned festivals, such as the Montreal Jazz Festival, the ’Internationale Jazzwoche Burghausen’, the ’Rheingau Musikfestival’, the ’Meraner Musikwochen’, Ollin Kan Mexico City and the Quebec Festival.

The quartet have performed concert tours in Egypt, China, Argentina, Singapore, Korea, Canada, USA, Australia and all over Europe.

Quadro Nuevo has been awarded twenty Jazz Awards by the German Phono Association and has received the European Impala in Paris on seven occasions. The albums have also been at the top of the World Music Charts and in the Top Ten of the Jazz Charts and the Top 50 of the Album Charts.