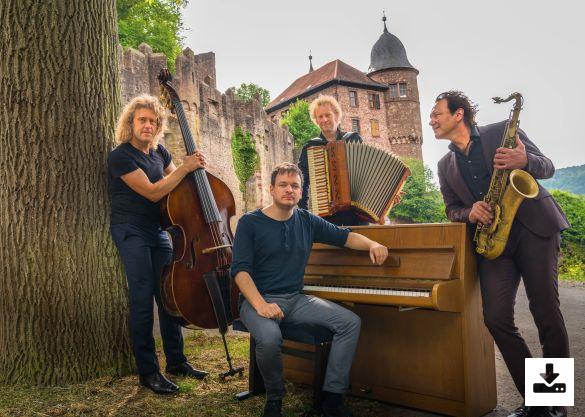 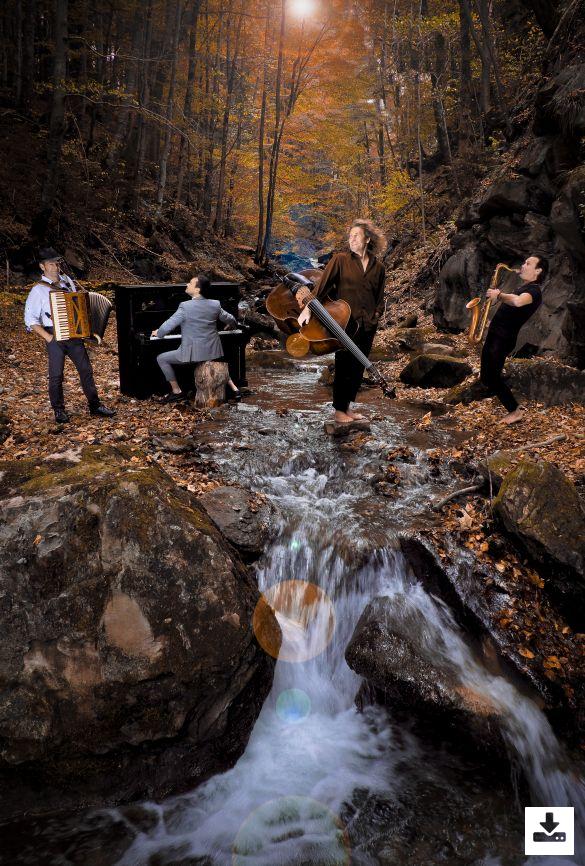 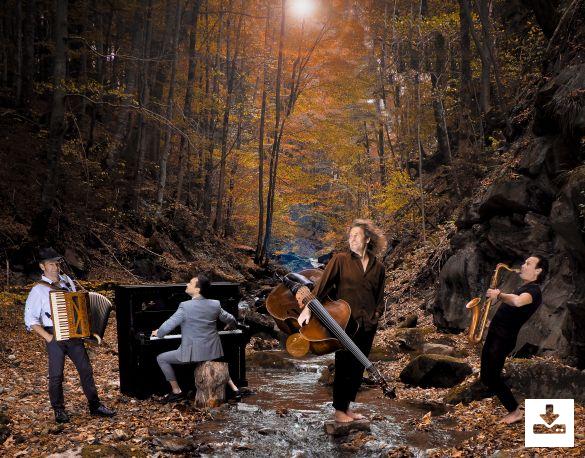 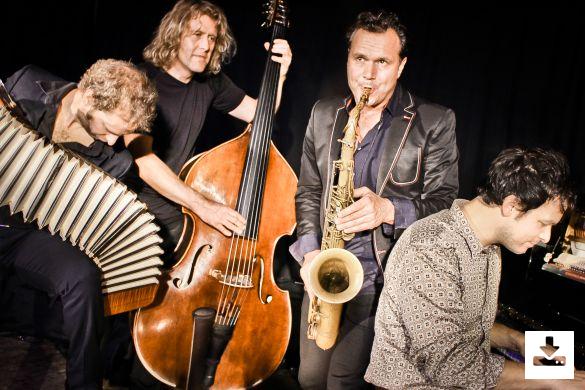 (Quadro Nuevo as quartett with Chris Gall on the piano)

The Quadro Nuevo virtuosos have been touring the globe since 1996, their music continuously nourished by encounters with foreign cultures and their peoples.
Back from the big wide world, the musicians of Quadro Nuevo now turn their attention to their own culture.
Born and bred at the foot of the Alps, at home in the world, constantly on the road:
Metropoles conquered, melodies sought, Bossa Nova found, played Swing in the Balkans, grooved in the Orient, rode camels through the desert, walked barefoot through the woods, ever onward, ever more exotic ... and then?

The longest journey: back to our own roots. The most hidden treasure: the one deep inside of us.
Enriched by all of their experiences, the ensemble dares to undertake a deeply personal experiment in their latest album Volkslied Reloaded (Folksongs reloaded):
to distill the musical essence out of the old songs. To give these old melodies back their dignity with youthful energy and rhythmic finesse.
Fearless - courageous - but without pathos.
Because they love to play them. And because, somehow, they belong to them.
The World Music artists of Quadro Nuevo embark on an adventurous journey through the centuries, tracking down these magnetic sounds from home and around the world.
With their light-hearted and infectious delight in playing, Quadro Nuevo’s musical artistry spans a broad connecting musical bridge.

The moon has risen.
We’ll meet at the well outside the gate.
All thoughts are free. Let them fly.


The current album “Quadro Nuevo & the Munich Radio Orchestra: Volkslied Reloaded” was released on SONY Classical as CD and double vinyl in Spring 2019.


About Quadro Nuevo:
Quadro Nuevo has developed its very own language of tone poetry as an instrumental ensemble away from run-of-the-mill genre stereotyping. Tango, Balkan swing, Mediterranean lightness, daring improvisations, Oriental grooves - the musicians’ inspiration is born of their encounters with foreign cultures Their venues are as diverse as the roots of their music: as guests in concert halls and at festivals, they are equally comfortable taking to the open air in southern towns as street musicians, acting as a nocturnal tango band encouraging people to dance, playing in jazz clubs or in New York’s Carnegie Hall. In its more than 20-year history, Quadro Nuevo has performed more than 3500 concerts, travelling from Berlin over the Alps to Buenos Aires and from Helsinki through the Caucasus to Hong Kong.
"The award-winning and internationally successful thoroughbred musicians" (Süddeutsche Zeitung) were awarded the ECHO Jazz as Best Live Act in 2010 and 2011 and have received a Golden Record as well as, on several occasions, the German Jazz Award and the European Impala.