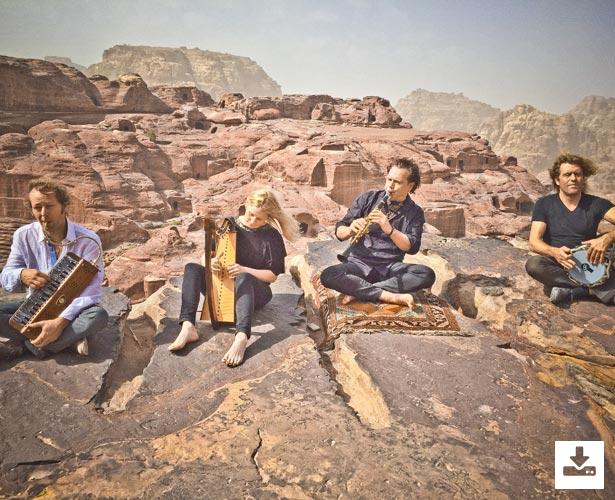 Tango, valse musette, flamenco, arabesque lovingly recreated film music and an Italy almost lost in time – since 1996 Quadro Nuevo has given over 1500 concerts throughout Europe.
The four musicians’ venues are as diverse as the roots of their music: The nostalgic-acoustic ensemble not only appear in concert halls and at festivals. The fervent virtuosi also travel around the Southern Mediterranean as street musicians enticing their audience to dance as a nightly tango band.

The Quadro Nuevo CD Mocca Flor was released in 2004 – music like a good cup of mocha. Invigorating the senses, warming the soul and laden with the fragrance of oriental pleasures. Luxury for the moment.
The sounds of Quadro Nuevo permeate like the comforting aroma of freshly ground coffee. Savouring the captivating experience, the listener is led into a world of swaying turbans, old taverns and passionate tango.
Orient and occident coalesce in the music of Mocca Flor. Spanish guitars, Balkan swing and arabesque melodies fuse with accordion rhythms into oriental tango. The magic of Klezmer and an bold melancholic saxophone add spice to old European coffee house music.
A magical story in sounds begins, whose adventure begins somewhere between Paris and Istanbul, Palermo and Cairo, Berlin and Piraeus.